Should You Save Money with Cheap Parts for Your Tech? | Lower Mainland Tech Support

Should I Save Money on Cheap Tech?

I’m sure you have heard the expression before; When it comes to technology parts, the concept of “you get what you pay for” tends to be true more often that not. If you try to save money with cheap tech, it may end up backfiring.

Of course, leading manufacturers and brand names are not 100% foolproof. (Remember the issues Samsung had with batteries?) And not every after-market product is a problem waiting to happen. After all, it is common to upgrade a computer’s performance with changes in components from other specialist brand parts. These can include video cards, memory, SSD drives etc. The problems seem to arise, though, when these parts are being sold at that price that seems too good to be true. Do you really want to risk losing work time and important data, just to save money today?

It happens across the tech spectrum. We have seen cheap printers that actually cost a fortune in ink costs. We have seen cheap laptops that can’t run the software someone needs. (They have then had to spend more on upgrades than if they had just purchased the next model up.) And we have seen parts that die much earlier than their brand name counterparts.

The number one offender, in our experience, seems to be cables – particularly ones that carry power. I am sure we have all seen the super-cheap phone charging cables at the dollar store, and been tempted to save money. After all, they are usually a tenth of the price of their brand-name counterparts. Bargain! However, they come with 2 significant drawbacks – these cables rarely last anywhere near as long as the official brands and, with any kind of prolonged use, we have seen cases where they caused significant damage to the device they are charging, or even the user themselves!

Health Canada actually tested a number of uncertified USB chargers, that were available to buy across the country and their findings prompted an immediate recall for most of them! It is no wonder that over 100 incidents of injury from the malfunctions with these chargers were reported in Canada between 2011 and 2018.

This may be the most obvious (and well-known) example, but we have also seen the same to be true for other kinds of computer cable, and in the case of one client, the damage went beyond the cable itself… 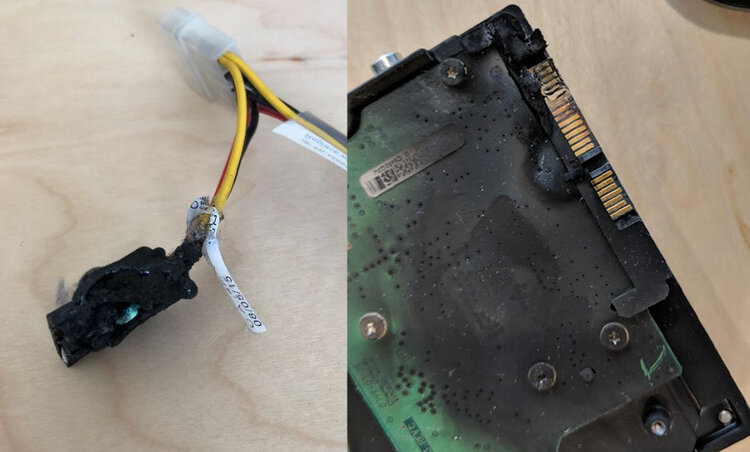 Luckily, we found out that the burning was contained to just the cable and device. But, if someone had not noticed it, there is no telling how far the damage could have spread. And further damage does not save money.

When it comes to charging cables, we like to stick to another popular saying – “better safe than sorry”!

If you are in the BC Fraser Valley, and need help with a hardware replacement or purchase for your business, contact us! Our tech experts will be happy to give you some honest (impartial) advice